This is quite silly but a little bit marvellous too, I’ve whittled a walking stick! Blaming Yorkshire adders for this silliness. Not that we saw any adders while walking in North Yorkshire Moors the other week but we saw a notice to ‘beware’ so I picked up a stick for defence purposes. Not that I’d really know what to do with a stick had we encountered an adder but thought I’d be safer with one than without. The stick turned out to be quite handy on that walk as I sprained my ankle later on and was very happy to have something to lean on. I exclaimed I was taking it back to London with us to some mild eyebrow raising from Beloved. Then I promptly left it in a caf while having a bite to eat. Typical, Beloved knew something like that would happen. The next day, however, on our last walk before catching the train back, I found an even better, sturdier stick and I did manage to bring it back! Now it’s de-barked, whittled and sanded and oiled a little bit (not sure if you’re meant to do all that, my Lost Crafts book only says to leave it for a year! to dry then whittle) and ready for a walk. I’m more than likely to leave it somewhere, break it or lose it but hopefully not for a while. Love its curved shape and its height – it’s really too long for a walking stick, it’s almost like a staff. Fitted on the back of the rucksack, looks likely to hit anyone in vicinity…

I have my very own strawberry jam! Very excited! As it’s the first time I’ve ever made it, thought it would be nice to go to a pick your own farm for strawberries. Took a day off work and set off early to Parkside Farm near Enfield. Glorious weather and I’m glad I was there early before it got too hot. Glorious strawberries too.

I only needed a kilo for the jam, recipe from River Cottage Preserves Handbook, but could not stop myself from picking way more than needed. 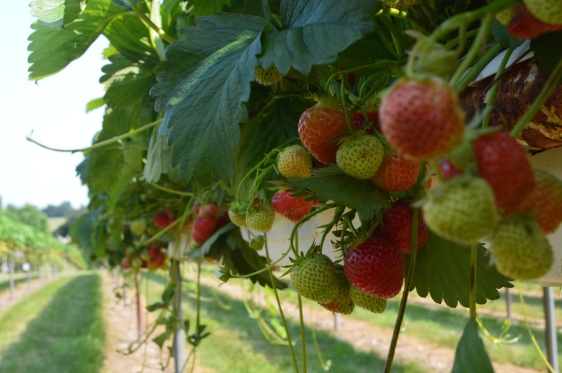 I also got very overexcited at broad beans, so yes, picked way more than needed…

I’d completely forgotten that the walk back to bus stop was up a hill. Total fruit & veg weight (including green onions and gooseberries) was 7+kg…

Strawberry jam, made, bottled, cooling. I feel this will go very quickly but the girl at the farm shop said they’ll have strawberries right up until October so I can go back for more if needed.

Having picked a lot more strawberries than needed, am also making a cheesecake for Beloved’s family get together this weekend and strawberry ice cream. Should still have some left over too. Marvellous.

It’s been a bit of a busy week, no time to post my first ever attempt at sourdough pizza from last Sunday. Additionally, first ever attempt to make pizza using a peel and a hot stone so was obviously very excited. I used Dan Lepard’s recipe for Sourdough pizza base from Short and Sweet and then topping came from Hugh FW’s Three Good Things book: beans, olives and mozzarella. Here’s a photo of the finished pizza: 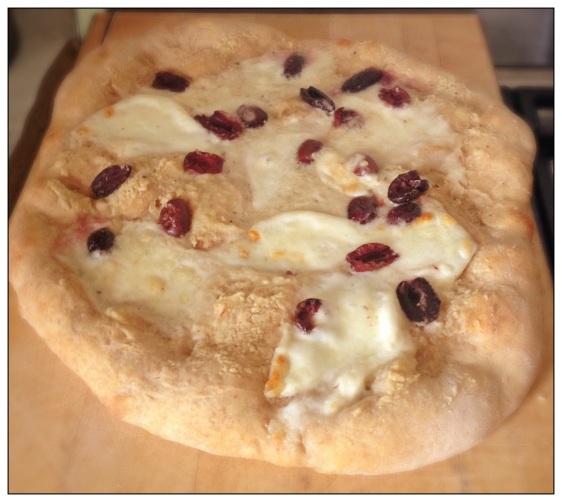 Didn’t roll out the dough, just stretched it by hand, the topping was just some chopped garlic fried in olive oil then added tin of cannellini beans and a little water, then pureed it all and spread on top of pizza dough. Topped with black olives and mozzarella.

Sliding pizza off the peel took some getting used to – and actually first attempt would not slide off at all (managed to rescue it later) so most important point is to flour the peel well. Hot stone is a total revelation, there was a good crust on the bottom – a proper pizza, makes just a huge difference from baking pizza on a normal baking sheet. Definitely worth getting one! Mine now just lives in the oven and comes out for a clean or when I’m baking/ roasting something else.

Sourdough base worked very well, it gives the pizza a more interesting texture – I used a combination of Italian 00 flour, strong white and strong wholemeal. Takes longer to prove but not as long as sourdough bread. Also feels a little healthier although that’s probably just in my mind…

A really lovely, if somewhat muddy walk today, 10.5 miles of London Loop from West Wickham to Riddlesdown. Once you leave West Wickham, this walk is mostly woodland, which was rather marvellous and now, back home, I feel happy. A little tired too, today’s was the longest walk we’ve done so far this year. We walked through Threehalfpenny Wood, Addington Hill, Bramley Bank, Littleheath Woods and Selsdon Wood, then along some fields and meadows (super muddy) and across Riddlesdown to the station and train back. Very peaceful, we hardly saw anyone other than a few dog walkers here and there. Birds singing and first signs of spring everywhere. Very uplifting! I mostly took photos of trees so here are a few: 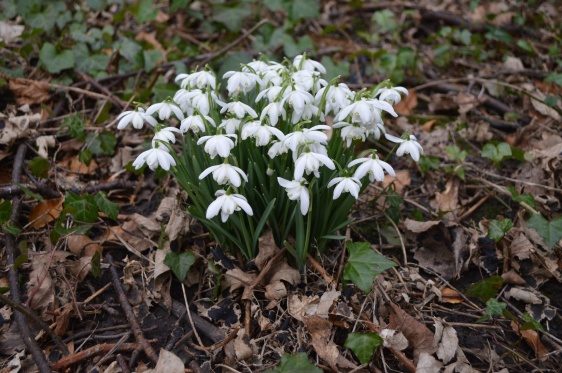 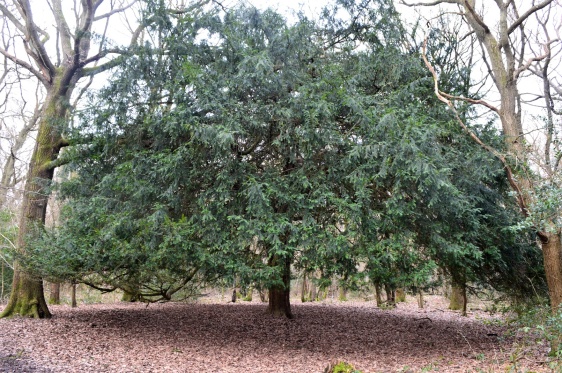 Got completely overexcited by snowdrops, so glad we didn’t miss them and that it is almost spring. The weather wasn’t sunny but definitely milder. Be lovely to come back to these woods in a couple of months, this was by far the most enjoyable walk of London Loop yet.

A lot of my childhood memories are about food, the sensation of eating new things or of particularly enjoying something, like the glorious moment of having Italian stracciatella ice cream for the first time. It’s a simple vanilla ice cream with shaved/chopped chocolate (not chocolate chip) and the sensation came back to me when I made this ice Marmalade and chocolate ice cream last week.

Total reversion back to childhood! At the same time, I haven’t used the ice cream maker in a really long time and I enjoyed making this immensely. Recipe came from Nigel Slater’s Kitchen Diaries II. I only did it because I really wanted to make marmalade but thought I should use up old stuff first. I didn’t expect to revert to childhood, wasn’t even sure that I’d like the taste of this. Well, it’s fantastic. Nigel’s recipe uses single cream for custard, which is then cooled before adding marmalade and churning. Chopped/ shaved dark chocolate goes in just before the ice cream sets so that you get even distribution. This is quite creamy, luxurious and soft and freezes well.

I’d long wanted to replace my old cheap ice cream maker under excuses that it’s a chore having to freeze the bowl first, that the motor sometimes can’t be stopped and so on (excuses can go on forever) but have now realised that none of this matters. It works and can produce such wonderful treats as the Marmalade and chocolate ice cream. Am now thinking that I could easily use up my large stock of white chocolate (which I don’t even particularly like but overstocked on for a recipe) and combine with dried sour cherries or cranberries for a similar result. Ice cream really is such a fabulous thing and there’ll certainly be lots more of it home made from now on.

My sourdough starter is now around six/seven months old so think I can start calling it Mother, which is rather nice. I’ve kept feeding it regularly over holidays but didn’t use it to make bread until yesterday. Having made a few other breads over holidays using different recipes (Ottolenghi, Leith’s, Paul Hollywood and Nigel Slater), I thought I’d experiment a little with my usual sourdough method and the results are most excellent, see here – ignoring the poor photo quality, just focus on all the air:

I tend to use 500g flour total, usually 300g white and 200g wholemeal bread flours, 60% water (300ml) a ladleful of Mother and a teaspoon of salt. When I made the sponge with 200g white, 100g wholemeal, the Mother and the water, this struck me as way too dry and I added around 80-90ml more water – other breads I’ve made recently have all had quite a high liquid content, so I thought let’s see what happens if I just add more water to my sourdough. Over the night, the sponge had bubbled up nicely and I added the rest of the flours and the salt and decided to use the mixer as opposed to knead by hand. Several reasons for this – I did wake up late with lots to do so thought mixer would save time but at the same time, I wanted to see how much more elastic the dough would be. Six minutes later (on a fairly slow speed), it felt wonderful. It’s quite possible that my tiny amount of work space in the kitchen doesn’t really allow for proper stretching when kneading, which is why the dough is never quite as elastic when I knead by hand. Coming back to deflate and shape every hour was just fabulous and as I left it to prove and rushed off to meet a friend for lunch I was very cheery (she probably thought it a bit much to get so excited about bread). In the end, it did expand width more than height wise so I guess I really should look into getting a proving basket. Taste is most excellent and clearly lighter than all my previous attempts, am so impressed with all that air! It proved for around 3 hours before being baked at 245C for ten minutes then at 180C for further 30 in a steamed up oven.

I now also have Fergus Henderson’s Complete Nose to Tail book (woohoo!) and have had a little look at their sourdough recipe (don’t think I’ve ever had better sourdough than at various St. Johns) which contains quite a bit of water too so think this is how I’ll continue. So happy.

I do love a sweet bun. For the past few months, all I wanted to do was make sweet buns. I did sticky toffee apple ones  a couple of months ago and then got preoccupied with other stuff. I found and saved several recipes for both Cinnamon and Chelsea buns, got a 10′ round case in preparation – was thinking Christmas holidays will provide ample time to make buns. Then I saw the Christmas masterclass episode of Great British Bake Off and Paul Hollywood’s Chelsea buns stuffed with Christmas dinner leftovers and got totally over excited, simple creature that I am. So, I made them yesterday and they were absolutely glorious:

The recipe is here for anyone interested, a warning though, it’s a very wet dough and I probably kneaded for longer than 10 minutes, took a while for it to become elastic. The end result is really wonderful, soft, pillowy bun and it would probably be just as good as a sweet cranberry bun (without the rest of leftovers). My only problem is that I’ve still got lots of Christmas Day leftovers in the fridge. Beloved and I have taken to singing Tetris tune as we open the fridge or any food cupboards as everything is so overloaded. Oh well, it’ll all get eaten at some point.