Well, this turned out better than expected! I made a Fig and walnut loaf from Leith’s Baking Bible yesterday afternoon and wasn’t really convinced by the recipe. As I had a work do last night, didn’t have time to take a photo or taste until this morning: 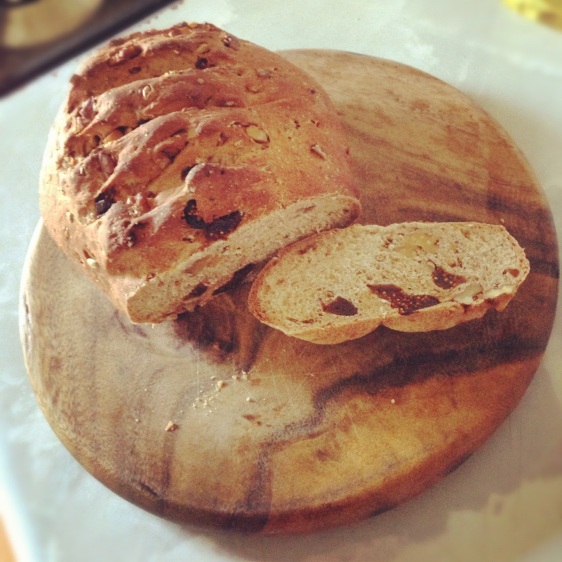 Leith’s recipe called for malted brown flour, which I’ve never used before so I found Doves Farm Malthouse flour – a combination of wheat and rye flours with flaked malted grains. Surprisingly, Sainsbury’s had this. Still not 100% sure this was the right flour to use but the bread is rather good so definitely making this again. I just had the end bit with butter straight from the fridge and it spread well, which is always a good sign. One thing I’d do next time is chop figs into smaller bits and also give the dough a slightly longer 1st rise (that’s two things actually). I was in a bit of a rush yesterday. I did end up with a smallish but rather cute loaf:

Mind you, I only did half the quantity – recipe was for two 450g loaves. There’s some honey in the bread and walnut oil as well as chopped walnuts and figs, it has a lovely taste. Feel a bit bad now for doubting the recipe – this was mainly because I got so used to making breads from River Cottage and Dan Lepard over the past months that any deviation in method (e.g. slashing the loaf before the final rise) sounds wrong. Anyway, really pleased with the result and glad I’ve found a good loaf to make for the cheese course for our early Christmas family get together.

Talking about Christmas get togethers, I’ve got two more puddings to make, today being Stir up Sunday. One for us to have on Christmas Day and one to take to another family get together a few days later. Was rather looking forward to this right up until this morning as I woke up feeling a bit fragile. Too much booze last night, am such a lightweight. Oh well, at least puddings not very complicated to make.

Signing off with a couple of ‘creative’ shots of Guildhall I took last night. Must plan an evening walk to take more shots of the City being empty and eerie (hopefully), these were just taken with phone and then messed with:

2 thoughts on “Fig and walnut bread”