Freshly baked (and still warm as I type):

Good crunchy crust and great texture with softened rolled oats and linseed inside. Also mix of wholemeal and white bread flour and made with soya milk.  Recipe from Dan Lepard’s Short and sweet.

Had it for breakfast, still hot so that butter melted into it. I love all sorts of things for breakfast but nothing can really beat freshly baked bread with butter.

Also posting a couple of pictures from a long walk yesterday, 11 miles or so of the Capital Ring going anti-clockwise from Clissold Park in Stoke Newington and up to Hampstead Garden Suburb, taking in Finsbury Park, walking along a disused railway line between Finsbury Park and Highgate – which I never knew existed, then Highgate woods, Cherry Tree wood, across Lyttleton Playing Fields, then left the Capital Ring path, walked through Big Wood and finally down across Hampstead Heath and Parliament Hill to get the ginger line back home. Hundreds and hundreds of people on Parliament Hill.

Think it’s rather marvellous that you can walk through so much greenery and woodland in London. We did this in the afternoon, in baking heat, which didn’t matter so much as there was lots of woodland to cool off in. Only took a couple of photos:

Having a break under a big old oak tree, Lyttleton Playing Fields, kids were playing cricket just to the right of us. 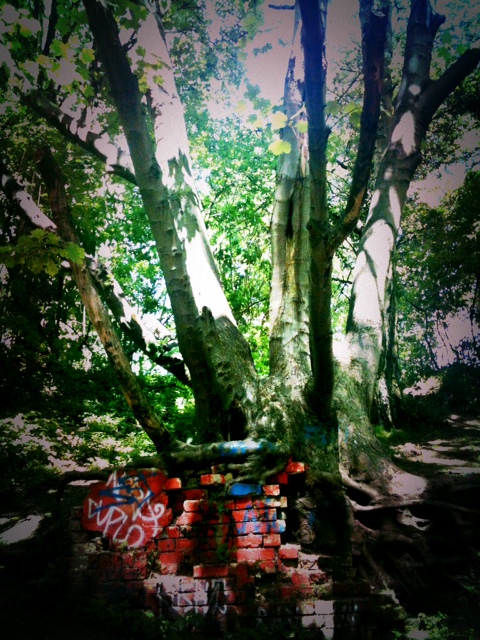 Graffiti-ed part of an old station platform on the Finsbury-Highgate railway line, now a nature reserve. Parts of this walk, around Crouch End were pretty popular but mostly very quiet.

Bread pics were instagrammed and I used more lomo for walk pics – unfortunately, more lomo, one of my favourite camera apps, doesn’t really do anything for bread and baking otherwise I’d be using it all the time!

3 thoughts on “Soya and linseed bread”